"Hello, I'm Manu Boubli from Superfly Records, a vinyl-only record store located in the 3rd arrondissement of Paris. As far as music is concerned, we're a record store, but we're specialized in black music in the broadest sense of the term. Basically, we sell soul and jazz from Africa to the West Indies, Caribbean music, reggae and hip-hop. And we also sell a lot of second hand vinyls and a few new records as well." What is the meaning behind the name Superfly?

The name Superfly seems pretty obvious, it's a common reference between me and my partner, it's Curtis Mayfield's record, the soundtrack of the blaxploitation 70’s movie, it's something that suits us a lot.

When did the store open?

We opened the store in 2009. Since my partner already had a website Superfly.com, he used it to sell records for about ten years. We figured it was a good time to open a store and bring our music community together.

Do you remember the first vinyl you sold?

I don't remember exactly the first vinyl I sold. But I do remember the first Saturday when we opened our store. In fact it’s in a neighborhood with many wholesalers, so we were under the impression we had made a mistake, that it was Sunday because there was absolutely no one in the streets. In the end, we had a really good day, a lot of people came later, but at the time of the opening, it was completely empty. It was funny, we kept saying to ourselves "there’s a long way to go" but by the end of the day we had already changed our minds.

In 2010 the label was launched. I already had some prior experience; I had launched “Comète” and worked with Tony Allen. And then, we wondered how to communicate with our customers about the store and because of the lack of adequate media, we felt advertising was not the best option for us. However, if we put records with our label in the best places in the world, where people buy records, then they will know who Superfly is, and we will get some feedback. And so from there, we started re-reissuing rare and collectible vinyls that are hard to come by or are extremely expensive. The idea was also to make them available at a more affordable price. 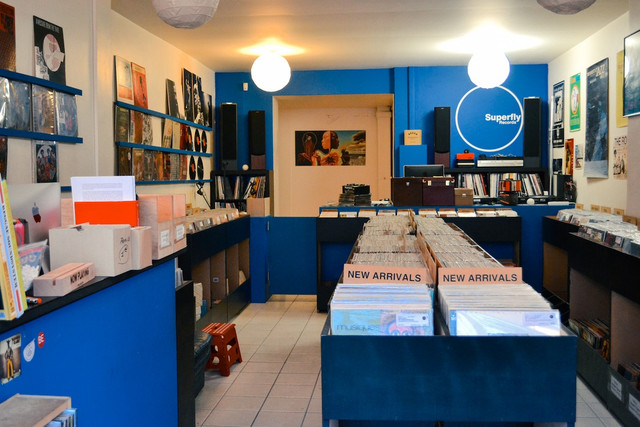 Could you elaborate on your production process? I know that you find your sleeves in Japan...

So... my partner and I are both collectors and we know that if we can't get the original record, the best alternative is to turn to Japanese pressing. In quality, in quality of cover, in quality of sound. For records we can’t find the original version, Japanese pressing is satisfying. With this in mind, we started thinking we were going to make records, we would want to buy and we said to ourselves that if we both want to buy these records, we will easily find 1000 people in the world who will agree with us. We make 1,000 units, we make prints for 1,000 units made in Japan with a hobby stripe like the Japanese do, and the process works pretty well. So far, we produced 31,000 vinyls and we must have 300 vinyls left in stock, so it's pretty good.

Which is your most recent release on your label?

So, the last two are completely sold out. The first was a Haitian vinyl called Haizon... But there are two new ones coming out in September. There is a record by a French jazzman, or rather a French composer better known for his operas and film score. It's Laurent Petitgirard, who is 20 years old, and who made a rather atypical jazz record, very nice. The second is Poly-Rythmo from Benin, which is also a record that's a little different from what we're used to hearing at home. They usually do longer tracks a la Fela [Kuti] where there's one song on each side. And this is a collection of 45 rpm, so really their very first tracks, many shorter songs, which we are not used to hearing from Poly-Rythmo.

What’s the latest album that resonates with you?

The latest album that rocked our world is a record released by Numero Group, an American label. We've been following this label since its beginning. This is number 196, one of its many records. Recently, Numero Group found an album by 24-Carat Black which was never released. It’s Numero Group’s third album. Officially, 24-Carat Black only launched one album. But ten years ago, [Numero Group] discovered a second album that had never been released, and now found a third album that is just amazing. It's always surprising to think that some records are never released, but it’s great since we can still find them. This is definitely the most exciting record we’ve encountered recently.

Which reggae album do you recommand for summer?

So my recommendation for the summer is “Java Java Java Java,” a dub album that we absolutely love. It's perfect for the summer: zen and soothing. You can just sit back and relax, take in the sun, sipping a cocktail and listening to side A and B to the dub album. It flows naturally.

Which band would you choose to make your shop's OST?

So, for our store’s soundtrack, we chose Curtis Mayfield’s first album, “Curtis.” It’s not very original, and it’s not Superfly either, but he’s our all time favorite soul singer. This album is a masterpiece that we can listen to until the end of time.

Which record do you keep close to your turntable?

The vinyl that I never take off my turntable is Sun Ra, Sleeping Beauty. I discovered it about fifteen years ago. I always keep it close by, not too far because at some point, I’ll need to listen to it. So this album... always very close to my turntable.

Which vinyl would you bequeath to mankind 200 years from now?

So it’s not very original but without a doubt, Marvin Gaye “What’s Going On,” one of the greatest records in music history. There’s no mistake, even if it’s 200 years from now, even if aliens have invaded the planet, we can still make them listen to him. We can never go wrong with Marvin Gaye.

Do you have something to say to vinyl lovers?

Simply "Thank you" to our vinyl-loving community. Without them, our store would not be. Music is life’s sweet drug, a very sweet drug that can stay with you, so don't hesitate, enjoy your music.