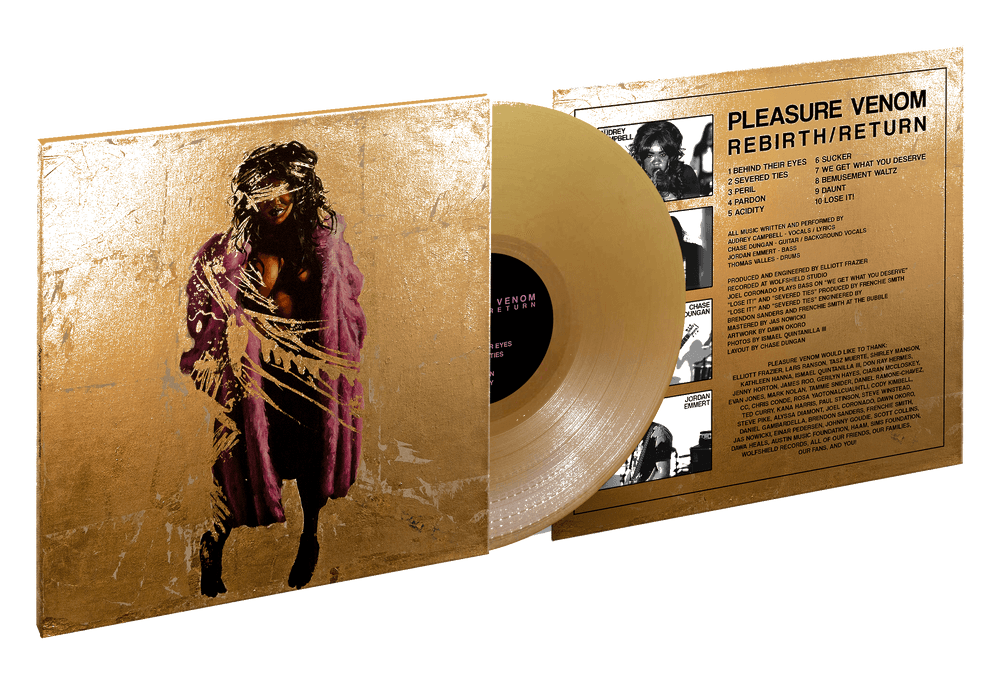 Pleasure Venom's first full length, Rebirth/Return, surges forth with a new energy as the band hones their signature sound and pushes it a step further. The LP is also their first release featuring the eviscerating riffs of guitarist Chase Dungan and pummeling bass of Jordan Emmert, who both bring fresh ears to the group. Screaming guitar laid over pounding rhythm on burners “We Get what You Deserve” and “Daunt” are in contrast to groove heavy tracks like “Peril” and “Acidity,” showing the band having as much fun in the pocket as they do in the pit. More melodic pieces “Sucker,” “Lose It,” and “Behind Their Eyes” demonstrate a knack for emotive melodrama. And as ever, the record is held together by lead singer Audrey Campbell's distinctive lyricism and inimitable vocal chops as she takes a more introspective turn. Long-standing drummer Thomas Valles's relentless hammering carries it all home. Ringo Deathstarr’s Elliott Frazier engineers and produces the joint, his second with the group after 2018's Self-Titled EP.

Experimental punk outfit Pleasure Venom of Austin, TX, explores topics of love, sex, resentment, racial injustice, and the general “absurdity of it all,” blasting audiences with a firehose deluge of fierce femme-punk rock. In July 2018, Afropunk named Pleasure Venom one of the Top 8 New Punk Bands on the Planet, and they showcased at SXSW Music Festival in spring 2019. Momentum building, the band caught the attention of Scottish powerhouse Shirley Manson of Garbage, and they joined Garbage’s US tour in early Summer 2019. With several critically acclaimed EPs and video releases under their belt, Pleasure Venom set their sights across the pond and toured the UK, playing Loud Women Fest in London that fall. They opened a sold out show for Against Me! in Austin, TX, in late December 2019. After taking time to regroup in 2020, the band entered 2021 with a bang, releasing “Fascist,” and "We Get What You Deserve," and playing Austin's LEVITATION. 2022 has seen Pleasure Venom opening for the Spits at Hotel Vegas and playing the Linda Perry EqualizeHER and Punk Black official showcases during SXSW Festival, releasing new single and video “Severed Ties,” opening a sold-out show for Bikini Kill, and featuring on the Peacock Network’s “Queer as Folk” reboot. They performed at the 2022 Austin City Limits Festival in October, and opened for L7 during Austin's LEVITATION over Halloween weekend. Their music and videos have been featured in NME, Kerrang!, Alt-Press, Afropunk, Okayafrica, and in numerous indie and local publications. Lead Vocalist Audrey Campbell was accepted into the Recording Academy in 2022.