A Fragile Tomorrow - It's Better That Way 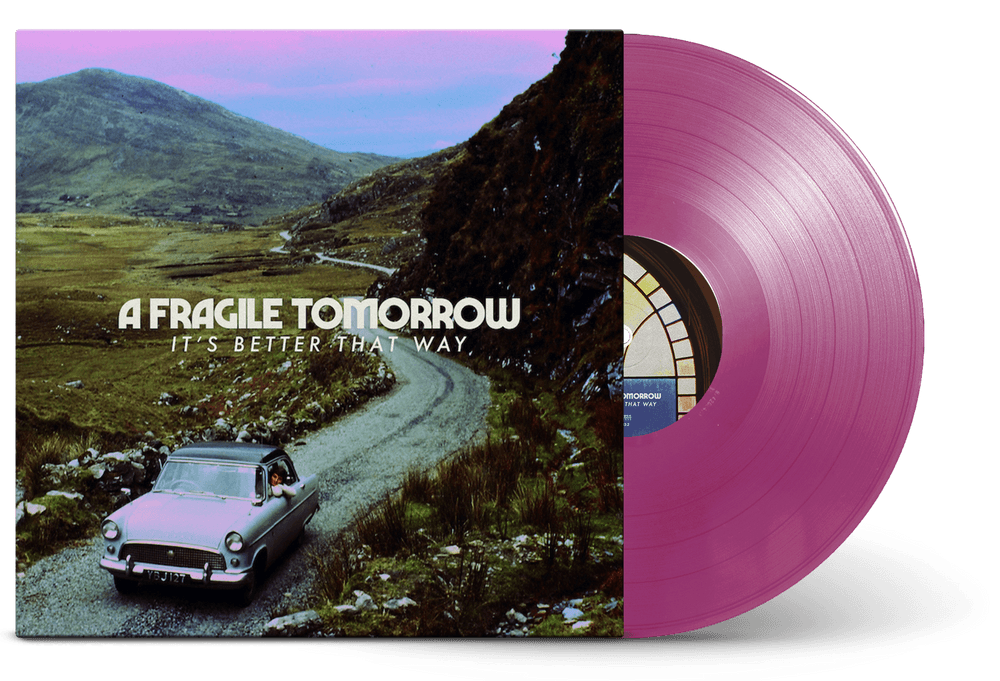 A Fragile Tomorrow's new album, It's Better That Way, which will be pressed in deep purple vinyl, is a sonic melting pot, combining many of the band's musical interests and diving into new territory as well. From Krautrock-psychedelia, to indie rock swagger, to Crowded House-esque pop songcraft, to British folk and hip-hop-influenced sampling, the album showcases the diversity of the band under the art rock banner, a term that AFT has adopted in recent years that has allowed them the freedom to explore outside of the confines of genre.

Emotionally dense, and resplendently raw and urgent, both the music and lyrics take one on a beautiful, albeit jolting, ride. The themes in the album weave between personal topics such as anorexia ("All Signs To Amsterdam"), losing a mother ("Another Club"), and the tribute to Sandy Denny ("Sandy"), to critical social/political issues facing us now. "Fraying Wire", a direct response to January 6th, brings attention to America's corrupt political system, where propaganda on the internet shape our belief systems. "For An Eye" looks at the prison and military industrial-complexes that are backed by a harsh capitalistic system, "Look Out" supports salt-of-the-earth union workers, and "Lost In Art" conveys a message of resistance to the conformity of mainstream music and the music industry.

About It's Better That Way, Sean Kelly explains, "It’s an album that is, I think, the best encapsulation of the band we’ve always been and the interests we’ve always had. There are rock songs, folk songs, loops and samples, mandolins, acoustic guitars, synths, straight-up pop songs in the vein of songwriters like Neil Finn, a song heavily influenced by hip-hop duo Madvillain, and some new wave-y angular jangle. It’s really an amalgamation of everything we love and everything we’re interested in exploring. It’s probably best described as 'art rock', a term that throws genre out the window, which is something that appeals to me."

With the departure of Dominic Kelly to pursue a career in political activism, brother Sean Kelly explains, "Dom leaving the band obviously was a pretty seismic event for us, since this band is something Brendan and I started with him in our basement in 2003. He loved being in this band but was feeling pulled in other directions, so much so that there was ultimately no way for him to devote anything to it anymore. His concern was always that the band should continue no matter what, and so we continued on with more motivation than ever to make a great record. I’m so proud of this record, and feel like it’s the best version of our band that we’ve ever been. And the most exciting thing is that it still feels like there’s more to explore."

Armed with a dynamic musical vision that is experimental as well as politically charged and passionate, A Fragile Tomorrow offers an intelligent, yet contemplative outlook for the future while plunging fist-in-the-air forward to push both themselves - and all of us - towards a beautiful, more united and compassionate tomorrow.

MISSION STATEMENT
"We aim to release amazing music by innovative, multi-dimensional artists who are passionate, hard-working, love to tour and will do whatever it takes to connect with an audience. Visionaries welcome!"