A limited edition print series of original artwork produced by well regarded international artists from Wild Beasts Art Agency mixing their unique styles with the world of vinyl. These works pay tribute to music and vinyl enthusiasts. Each print is stamped and numbered and will be accompanied by a certificate of authenticity. 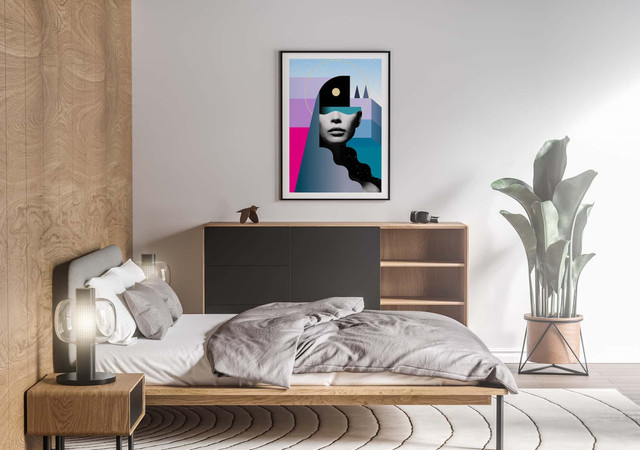 Skio was born in Nice in 1980. At the age of 15, he began drawing on the walls of his city with sprays found in his cellar, without knowing that it was forbidden! A few warnings later, he was fully integrated into the graffiti movement by working in the shade of trains and walls in south-eastern France. After a few urban festivals, Skio devoted his energy to the creation of illustrative frescoes. He graduated as a multimedia designer in 2004 and moved to Paris in 2006.

An active maker and shaker in the Parisian street art scene, Skio has effortlessly show cased his technical knowledge moving through spray paint, air brush and paint brush. From vandal lettering in his early days to a figurative and romantic universe, inspired by the Bauhaus and artists such as Chirico, Magritte and even Dali and embracing his love of pop and television culture, Skio has created his signature style, mixing geometric shapes and realistic forms, with sophistication on canvas.