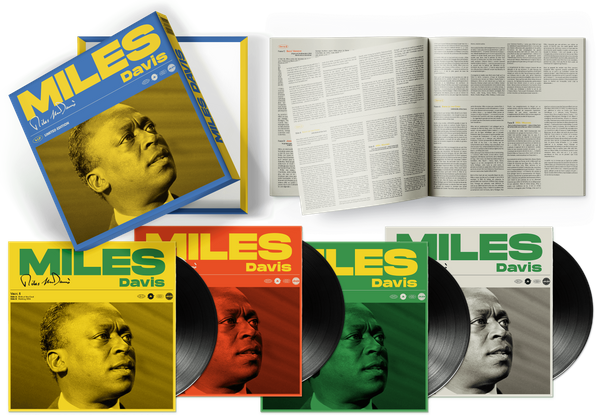 4-vinyl limited edition box set including a 33 x 33 8-page booklet featuring the biography of Miles Davis but also anecdotes and extracts from interviews over the entire period of the set. All the tracks included in this box have been remastered for the occasion:

Thirty years after his disappearance, Miles Davis, both the man and his character, is still a subject for debate and controversy. And haven’t we heard that before with all artists? But when it comes to the importance of his contribution to music in the 20th century there is only unanimity.

Everyone says, sure, he was the greatest trumpeter. Other opinions are that he left the world of jazz behind him in 1965. It’s also said he was the catalyst of every decade from 1949 to 1989; that he revolutionised jazz, and brought it out of the ghetto; that he buried jazz; that he was the most important musician of his century... Each of those statements has its share of truth. Whichever way you look at him, he remains a major figure in jazz and in 20th century music overall. Miles surpassed (or at least equalled) the importance of both Louis Armstrong and Duke Ellington for the simple reason that he addressed not only the jazz world but all worlds of music, and that he created (among other things) a fusion of the spheres people knew as jazz, blues, rock and pop, and spoke to every audience, either in turn or collectively.

There was a dinner at the White House during which a perfectly respectable lady, married to a politician no doubt, asked Miles what he did for a living. With some annoyance Miles replied, “Well I’ve changed music five or six times, so I guess that’s what I’ve done [...] now tell me what have you done of any importance, other than be white? [...] You tell me what your claim to fame is.” The provocative tone in Miles’ words lifted the veil over his refusal to be hassled, his revulsion against America’s treatment of Black people, and Miles’ awareness of his own importance in the world of music. Even when speaking, Miles maintained the art of synthesis.

In the beginning – this was 1944 – there was a concert in St Louis, Missouri where Miles heard Charlie Parker and Dizzy Gillespie for the first time. “Man, that shit was terrible, I mean Dizzy Gillespie, Charlie ‘Yardbird' Parker, Buddy Anderson, Gene Ammons, Lucky Thompson and Art Blakey, all together in one band [...] that shit was all up in my body and that’s what I wanted to hear [...] and me up there playing with them.1” Miles was 18, he’d been playing trumpet for years and now he knew that this was what he wanted to play, and nothing else: to play with Bird! A year later he’d turned 19 and he was in New York, where he learned it all, up there alongside Bird and Dizzy.

The history of music shows us that different kinds and forms follow each other. And that the latest trend overshadows the one that came before it. Today it's difficult to say exactly which trend dominates, as there are so many music currents that overlap and intersect. Mainstream exists no longer. Yet one thing is certain: each music form is built on the music that precedes it. There would be no jazz without classical music, no rock without blues, no rock without jazz, no rap without soul music, no sampling without the riffs of either soul or rock… and therefore, inside each genre you find different chapters in the history of music. And that is why it is so important to understand their origins: they shed the light that is necessary for an understanding of the music born every day.
The richness of jazz lies at the origin of so much music today that it is essential to discover this creative wealth. The Essential Works of Masters of Jazz bring to light those 20th century creations that still exert an influence on the majority of musicians today — whether they are aware of it or not.

The Essential Works of Masters of Jazz gather the fundamental creations of the music of today.